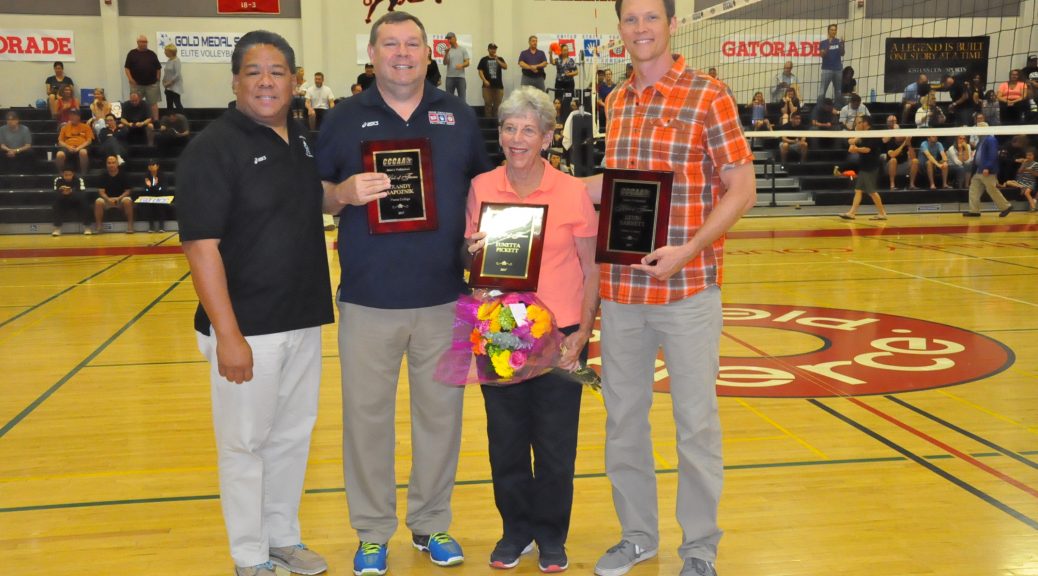 Last Saturday, Pierce College in Woodland Hills, California inducted USYVL Executive Director, Randy Sapoznik into the volleyball Hall of Fame at the college. The Hall of Fame ceremony occurred between the second and third sets of the championship match of the California Community College Athletic Association (CCCAA) featuring Orange Coast College and El Camino College. Sapoznik is 1987 alumni of Pierce College and played on the volleyball team during his time with the Brahmas. Joining Sapoznik as a Pierce College Hall of Fame inductee were Eunetta Pickett, a longtime volleyball referee, and Kevin Barnett, former player and volleyball color commentator. Sapoznik is the Co-Founder of USYVL and currently serves as the Executive Director. USYVL, founded in 1997, began in Southern California with 139 players. Today that number has grown to more than 15,000 players annually, nationwide. This phenomenal growth reflects Sapoznik’s leadership, vision, and commitment to youth volleyball programs that promote a healthy competitive sports atmosphere and the development of responsible individuals. For two decades his leadership and hard work has provided a natural pipeline tool for young children to experience and learn the sport of volleyball and to assist young people in developing an appreciation for good sportsmanship and lifelong participation. Several USYVL participants have advanced on to play at the NCAA level. USYVL joins Pierce College in recognizing Sapoznik’s valuable contribution to the sport of volleyball, in particular the growth in youth programs that give children a fun and safe place to learn and play volleyball. You can watch a replay of the CCCAA championship match online courtesy of So Cal College Sports. To view the Pierce College Hall of Fame induction ceremony, go to the 1:09:15 mark of the online video. Join USYVL in recognizing Randy Sapoznik’s Pierce College Hall of Fame induction and contributions to the volleyball world!